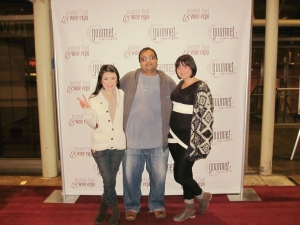 Getting ready to explore the annual Gourmet Food and Wine Expo for the first time!

This year, Raj and I attended the “VIP Preview Evening” of the Gourmet Food and Wine Expo. Even though it may sound exclusive, this “VIP Night Admission” on Thursday, November 20, 2014 was open to anyone 19 years of age or older. It was just a chance to attend the event before the “General Admission”, which ran from Friday, November 21, 2014 to Sunday, November 23, 2014. To be honest, if our tickets were not comped, we would not have attended. Although the food and wine selections were great and extensive, it was really crowded and the $45 “VIP Night Admission” tickets did not include any sample tickets, which were an additional $20 minimum. The sample tickets costed and were worth $1 each and they were sold only in multiples of 20. According to their website, the “average spending to enjoy a wide variety of food and drinks is $40 per person”. For us, $20-$30 per person was more than enough.

It only took about one hour after arriving to find Ginny amid the chaos.

While we found the admission costs high, the food and drinks were reasonably priced and we had a blast sampling food from various restaurants across the city and a few drinks here and there. There were lots of healthy food options for Raj and me too! Here is a recap… 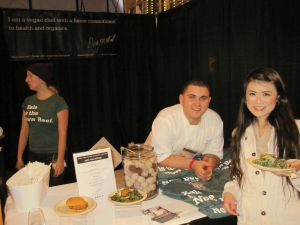 I was so excited to see Vegan Chef Doug McNish there! He was serving a black bean slider (with roasted red pepper chipotle aioli and caramelized onions) and kale caesar salad (with smoked eggplant “bacon”) for $8. They were so good and you would never guess they were completely vegan!

One of my favourite dishes from the event was the quinoa salad with chicken from Nutrafarms. It was such a simple dish, but I loved it! ($3)

Almond Breeze was sampling their different flavours and varieties of almond milk and their Vegan Berry Lemon Muffins recipe (featuring their sweetened Original almond milk). Their drink and muffin samples were complimentary. While the muffin recipe is not all that “clean”, the muffins were certainly delicious and my lactose-intolerant digestive system was just happy they were dairy-free. 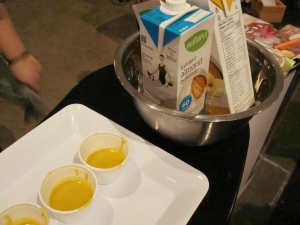 Natur-a made butternut squash soup (one of my favourite soups) with their almond milk. It was creamy even without any dairy! The samples were complimentary. 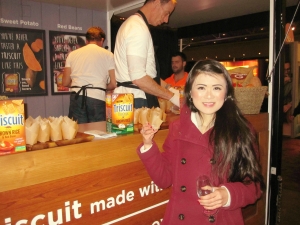 Triscuit was handing out free samples of their new Brown Rice Triscuits. 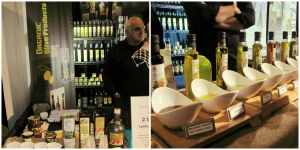 The organic and herb-infused olive oils from Nisos Importing were so aromatic and flavourful! All their products are imported from the biggest Southern island of Greece, Crete. 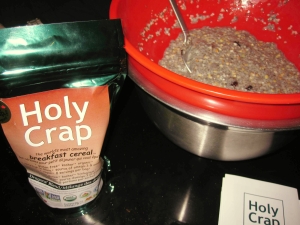 If you’ve been following our blog, it’s no secret that Raj and I love hot sauces! The preservative-free and additive-free hot sauces from Ottawa by Meow! That’s Hot. were tasty and none were too spicy.

There were some interesting Japanese dishes, none of which I was in the mood to try. From top left, clockwise: Seaweed Salad (the only one of the five dishes that Raj and I have tried before), Ankimo Mentai (steamed monkfish liver with spicy cod roe), Chuka Iidako (seasoned baby octopus), Tsubukko Tako Wasabi (seasoned octopus with wasabi), and Kimchee Wakame (spicy garlic seaweed salad).

To stay on the healthy track, I limited myself to a maximum of two drinks that night. One of my two drinks was an Orange-Creamsicle-like cocktail made with Pinnacle Vodka. The vodka was too strong, so it didn’t really taste much like an Orange Creamsicle. I wasn’t a fan. The bartender’s mixing skills were better than the drink.

Raj and I attended the Niagara Food and Wine Expo earlier this year and one of our favourite wines there was the Muskoka Lakes Winery Cranberry Blueberry Wine. So when we spotted it here, I knew it HAD to be one of my two drinks for the night! So sweet, fruity, and festive! ($2)

Next year, if we decide to attend, we will most likely go on Friday before 5 PM or on Sunday when admission tickets are $25 each and $20 each, respectively. It will probably be less crowded then too. I am happy that we finally had a chance to attend this annual event and that there were healthy food options. We had a great time!

One thought on “The 2014 Gourmet Food and Wine Expo Recap”

If you have any questions, comments, or business inquiries, please email:

The contents of this blog are based on the thoughts and opinions of its authors. This blog is not meant to provide personal medical advice. If you have any medical concerns, please consult your physician and/or healthcare professional.
%d bloggers like this: